In 1895 the Rangiora Borough Council asked Sir Westby Perceval if he would donate part of the unsold Percival land for a central park, but he refused. (Sir Westby Perceval spelt his surname differently to his father, Westby Hawkshaw Percival.) However, in 1902, Perceval put the remnants of the old Percival section up for auction and the Council bought a little over two acres adjacent to the fire station for £410 as a belated memorial to mark Queen Victoria’s Jubilee in 1887.

In October 1902 a pedestal lamp costing £20 was placed at the entrance as a memorial to two Rangiora soldiers, Sergeant H R Rule and Trooper J W Sansom, who had died in the Boer War. The lamp is no longer there, but a sundial was later erected and the names of the soldiers added, and an inscription commemorating Edward VII’s coronation.

Plans were under way by September 1905 for the erection of a band botunda in the park. A design by the businessman and Borough Councillor, Thomas Keir, was accepted and out of three tenders which differed by just 30 shillings, that of Wadey and Efford at £115.10s was accepted twelve months later. The band rotunda was opened by the Mayor of Rangiora, Edward Relph, on 24 January 1907.

The first gas lamps with gas from the new gasworks were turned on at the opening of the rotunda. After World War One, an artillery piece was placed as a memorial to those who died, although this has since been removed. Gradually, trees and gardens grew in the park and it became a small haven for peaceful leisure in the middle of town.

park has been the gathering place for residents on significant occasions – the Proclamation of Elizabeth as our Queen in 1952, and visits by Governors-General, being among them. A number of the trees were planted as a memorial for events, or prominent citizens. 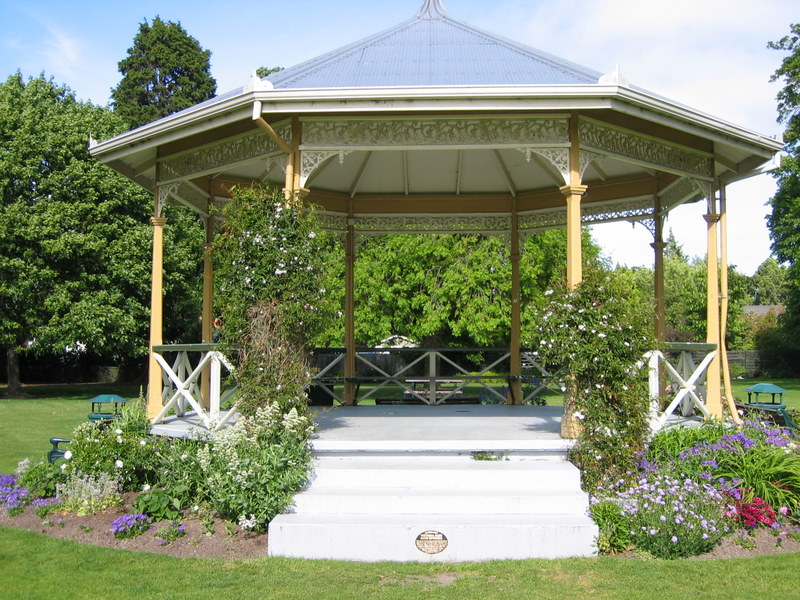