History of the Chamber Gallery

The Chamber Gallery was part of the original Rangiora Borough Council building and home to the previous Rangiora District Library. 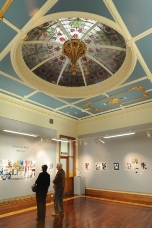 The architect of the Chamber was Frederick John Barlow, who was born in Christchurch in 1868.

He was articled to Alfred Simpson around 1882-86. After this initial training he left for Australia working in several practices before being appointed as Head Instructor in Architecture and Building Construction at Gordon College in Geelong. By 1893 he was back in New Zealand.

Designed in an ornamental classical style, it is Barlow’s most substantial surviving work. An unusual design aspect of the building is the asymmetrical façade with the front door placed off-centre. The ornate domed ceiling is the principal feature of the building’s refurbished interior.

Built by local builders, Arthur Vincent and John Golding, for £1052 it also contained a Town Clerk’s office (now the small meeting room), a public office and a room for the Mayor – later the Electrical Engineer’s office (now occupied by the Citizens Advice Bureau). The Mayor Edward Relph presided over the first Council meeting held there in June 1907.

The Council Chambers building was given Landmarks status