The official celebration of the opening of the line to Rangiora was marked on 5 November 1872, and the first Rangiora Railway Station was built around that time.

The building was of wood and iron, and included a public lobby, ladies’ waiting room, luggage room, stationmaster’s room and an office for the inspector of permanent way. The first Rangiora Railway Station was a junction station, built across the angle formed by the main track and the Oxford branch line, and had a platform at each end. 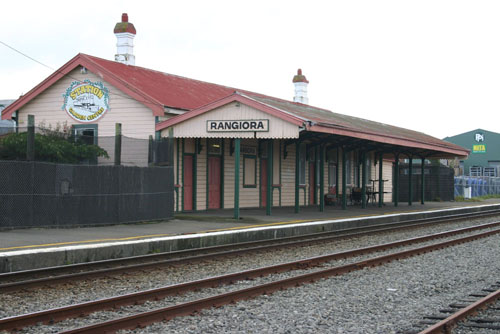 The Rangiora station was also a refreshment stop. The refreshment room, a small wooden shed with a platform counter on the south side of the station, opened in 1883 and was closed in the 1930s.

The Minister for Railways approved a new station for Rangiora early in 1908. The second Rangiora Railway Station was built in 1909, and was designed by George Troup who also designed the Kaiapoi Railway Station. The General Manager of New Zealand Railways, T O Ronayne, asked for a building 'similar to Kaiapoi but without so much ornamentation'. The cost for the building was estimated at £1,400.

The station features verandah supports and decoration of railway iron, and it was originally roofed with Marseilles tiles.  In 1948, at a cost of £443, the parcels office was subdivided into a storeroom, parcels office and cloakroom. By 1977 it was decided the Marseille tile roof had to be replaced and the cheaper option of corrugated iron was chosen.

The Rangiora Railway Station was closed in 1988 and has been home to cafés and a garden centre since that time.  It is currently operated as a café, appropriately called 'The Station'.