History of the Oxford town hall

Oxford originally had two town halls. The Central Town Hall was built as a private venture in the late 1870s and served residents of West Oxford as a place of entertainment and for meetings. It was purchased by the Oddfellows Lodge of West Oxford inm1880 and became known as the Oddfellows Hall. It was sold in 1900 to W Paget who owned the nearby Commercial Hotel, and demolished in 1932. 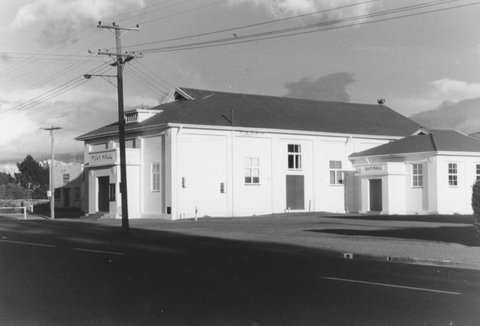 The East Oxford Town Hall was built by the Oxford Town Hall Company in 1875, but was destroyed by fire not long after it was built. A new hall was built in 1880 and the first silent movies were screened there. In 1924 the Oxford Town Hall Company decided to go into liquidation and sell the hall. It was offered to the county council, but they were unable to meet the cost of buying it. The recently formed Oxford Benevolent and Improvement League purchased the hall for £400 and presented it to the town. The League considered building a new town hall, but its members felt that a new hall would be more suitable for the district and should be owned by a public body. Plans were drawn up by H Murray of Christchurch, and the county council accepted a tender of £3050 from Keir and Thompson, builders of Rangiora, to build the new town hall. The new central town hall was officially opened on 3 June 1931.

When it was built the town hall had all the latest 'talkie' movie equipment installed. For many years the town hall was Oxford's major source of entertainment for movies or dances. Several improvements were made to the stage over the years and the hall fulfilled its purpose of becoming the civic centre of the district.