History of the Oxford library 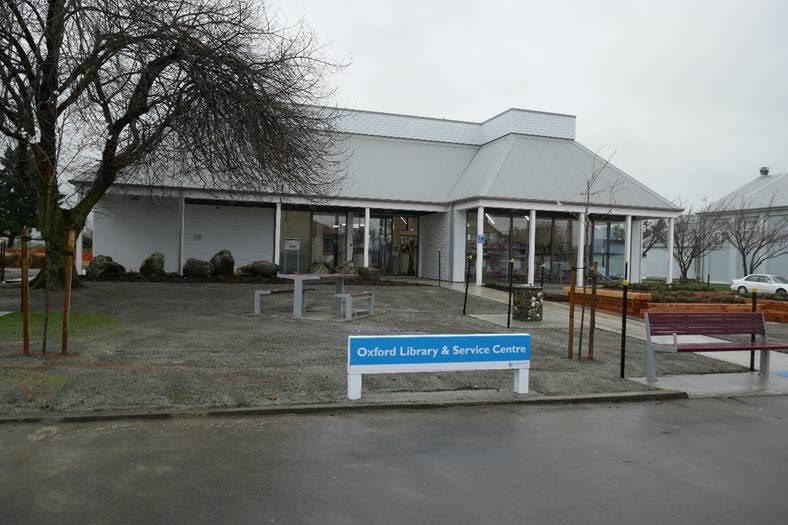 Oxford, as with other towns in the Waimakariri District, first had a Mechanics’ Institute, a forerunner of the Workers’ Education Association and today’s Community Centres.  In May 1868 a meeting was held of people interested in forming an educational group. At that first meeting Mr Thomas Broome offered a section of land at the corner of Church Street and Bay Road “to the people of Oxford to be held in perpetual trust for the following purposes: Mechanics’ Institute, Library, Reading Room, Teetotal meetings, Lectures, Literary Lectures or Debating classes on Political Economy, Arts and Sciences”.  Mr Broome’s offer was accepted and a subscription list was opened for the building.

Three months later the 'Mechanics’ Institute' was built at a cost of £37.  The trustees for the property were Wilson Fisher, Thomas Broome, Henry Sedcole, Philip Briggs and William Heyward.  The first committee consisted of Wilson Fisher, Philip Briggs, Henry Sedcole, Henry Meyers, Will Forbes, Will Milligan and Thomas Broome.  A Government grant for books was obtained and the Institute soon had a membership of 70.

It was opened as a reading room three days a week, from 2 pm to 10 pm.  At monthly lectures, a collection in aid of funds was taken.

After about 20 years the Mechanics’ Institute as a social force began to lose its hold and the number of subscribers dropped to almost nil.  The last recorded minutes were in 1888.  The building was later moved to the Anglican Church section on High Street where it was used as a Sunday School, and later still from 1913, it was used by the East Oxford School as a cookery room, and then for woodwork and metalwork.  After the new school was opened in Bay Road, the building was used for storage and was demolished in 1934.

The Workingmen’s Club had opened in 1887.  Members had free access to mainly popular fiction as part of their club subscription.  Some daily and weekly newspapers were also held at the Club.

The next library was built in Pearson Park on the site where the present War Memorial stands.  The building had to be moved slightly to make room for the memorial in 1920. The library committee had made a request to the Domain Board for permission to erect a library facing Main Street.  Permission was given and the board made a grant towards the cost.  It opened on 8 February 1893 and the books were transferred from their temporary home in the Orange Lodge.

The building was eventually handed over to the Council to sell and the money was put towards the Centennial Memorial building in Main Street.  This was built to house the Oxford County Council, lounge and library and commemorated 100 years of Canterbury settlement in 1850.  The architect was Mr Munro, and Blakeleys of Kaiapoi were the builders.

The first Council meeting in the new chamber was on Friday 21 March 1958.  The library moved in a week later.  The official opening was on Easter Monday, April 7th.

After local government amalgamation in 1989 and a new rating system was implemented, there was a greater interest in the library.  As part of the larger Waimakariri District Library system a much wider range of services were available. This service was up and running in July 1990.  The opening hours were increased from 3 to 16 per week.  The Oxford Library Committee was dissolved with a support group taking its place.

In September 2000 the library moved across the road to the newly-enlarged Oxford Service Centre and Library.  The Mayor of Waimakariri District, Janice Skurr, an Oxford resident, performed the official opening.  Mrs Skurr said the new centre markedly improved the service for Oxford by doubling the space for the library, as well as enlarging the space for postal services and general Council enquiries.  Opening hours were also increased to coincide with the service centre hours.

After the Earthquakes of 2010 and 2011, it was discovered that the Oxford Library and Service Centre building was unsafe.  Half of the building was closed off in order to strengthen the external wall, as a temporary fix.  During this time the library moved to the back of the building, in the mail sorting room where it operated for 6 weeks.  The council service centre remained in the safe side of the building.

After the temporary strengthening was completed, the library returned to the main part of the building.  After consultation with community boards, it was decided that the Oxford Library and Service Centre building would be redeveloped.

The building was designed by architects Warren and Mahoney, and Hawkins were contracted to construct the building.

There was a period of 14 months between the building being closed for redevelopment, and the new building opening.  During this time the Oxford Library and Service Centre operated from the Pearson Park Pavilion.

The new Oxford Library and Service Centre opened to the public on September 18, 2017.