The history of the MV Tuhoe

The MV Tuhoe was built in Auckland in 1919 by George Nicol and was launched on 7 April. It was a 97-foot, double-masted auxiliary schooner, constructed of triple skin kauri for the Northern Steamship Company, intended for navigating the harbours and rivers of Northland and the Coromandel. The ship was originally fitted with two 60-horsepower engines from Glasgow that had been salvaged from the ship, Eunice, which was lost the year before. The Tuhoe’s maiden voyage took place on 1 May 1919, from Auckland to Whakatane and carried on to Tauranga. 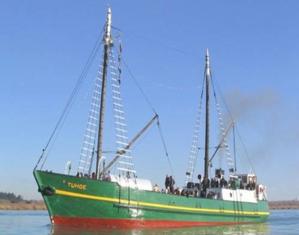 It is named after the Maori tribe, Tuhoe, ‘the children of the mist’. According to Maori folklore, the Tuhoe tribe were the offspring of the mist-maiden Hine-Pokuhu and the mountain Maungapotahu who people the steep forested Urewera country, west of Gisborne.

During the Second World War, the ship was taken over by the New Zealand Navy before being sold to the small ships section of the United States Army. It sailed off the north-east coast of Australia and New Guinea, carrying supplies to assist the allies against Japan. It was designated USATS 132 by the US Army. Ships logs were not kept during the war due to security reasons, but some of the ship’s orders for the Tuhoe have survived. The war also meant it was fitted with two quick firing 50-calibre Browning heavy machine guns. In August 1944 she turned up at Townsville, marked ‘surplus, for return to New Zealand’ but someone changed their mind and she was returned to the operational area in October that year. During the war, her original engines needed replacing but marine engines were scarce and so for a number of months, she ploughed through the seas with two Chrysler truck motors attached before near-new diesel engines were found in 1944.

Following the war, she returned to New Zealand and continued trading from Auckland. Between 1956 and 1960, the Tuhoe was laid up three times then in August 1961, she was sold to T Eckford and Co. of Blenheim. She was towed from Auckland and then laid up in the Opawa River where it was found to be unsuitable for the Wairau river trade. She was then sold to the Kaiapoi Shipping Company in early 1962 and made her first visit to Kaiapoi in April of that year. In June 1963 she became stranded on the Waimakariri Bar but was refloated on 1 July. She sailed between Kaiapoi and Wellington trading until November 1963 when the roll-on, roll off ferries killed the trade from Kaiapoi. Initially she was converted to a line fishing vessel but a serious leak led to her being declared unseaworthy and she was laid up in Kaiapoi. For a time she was used as floating art gallery by owner Charles Williams but largely the Tuhoe remained stationary until October 1980, when the Cure Boating Club Inc. bought her for use as a clubrooms and restoration began by a group of eight dedicated people.

In 1982 the MV Tuhoe Preservation Society was formed and membership swelled to over 100. They leased the Tuhoe from the Cure Boating Club and began even more intensive restoration. The restoration of the ship for weekend river cruises recaptured its past, when it travelled fully laden with 100 tonnes of cargo, up the river and across the Waimakariri bar and out to sea and destinations far afield. The former cargo-hold became a place for purchasing refreshments and also housed a small museum of Tuhoe memorabilia.

In 2000 the hull was replaced during a two-month stay in Lyttelton, following a Community Trust grant allowing the work to go ahead. In late 2001 a dispute arose between the Tuhoe Preservation Society and the Cure Boating Club over money, which mediation failed to resolve. The result was that the Tuhoe Preservation Society was wound up and the lease returned to the Cure Boating Club after about two years of debate.

In late 2003 the Tuhoe was put up for tender and there were fears that it would be taken away from Kaiapoi. However, the Cure Boating Club accepted a joint amount submitted by MainPower New Zealand and Kaiapoi Electricity, the lowest it was offered because it meant that the ship would stay in local hands. They then set up a trust, the MV Tuhoe Kaiapoi Rivertown Trust, and the ownership was transferred to them. Six trustees were appointed to manage the direction and future of the Tuhoe. Regular sailings of it resumed in June 2005.

On Sunday 27 September 2015 the MV Tahoe ran aground at the mouth of the Waimakariri and was deemed salvageable. Tahoe salvage effort