A brief history of the Kaiapoi war memorial

In 1919, following the end of the Great War, the Kaiapoi Patriotic Committee considered several options for the town’s war memorial.

It initially decided on a Memorial Town Hall. However, escalating costs meant that committee was replaced by a new War Memorial Committee, who then selected local stonemason William Thomas Trethewey to sculpt a statue to stand at the east end of town by the Kaiapoi River. 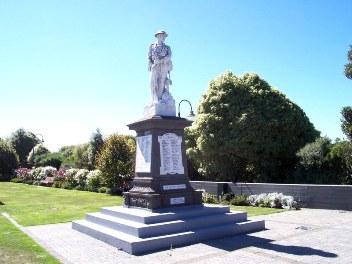 Trethewey sculpted the 10 foot statue from a five tonne block of marble imported from Carrara, Italy, a fine-grain but durable stone, and stood on a base prepared by Daniel Berry, an associate. A former Kaiapoi serviceman was enlisted to model for Trethewey to base his design on and the final statue was unveiled on 26 April 1922. It portrayed a Digger, at rest after a desperate charge and captured in its stance the effects of war and a grim determination to carry on despite the odds. In his speech at the unveiling, Kaiapoi Mayor J H Blackwell described the statue as capturing the spirit of ‘a typical Anzac’. With this memorial, Trethewey set a benchmark for others around New Zealand and it is still considered one of the finest.

In 2004 the Memorial Reserve underwent a revamp. The statue, together with memorials to other war veterans, stands on the bank of the Kaiapoi River as a quiet place of remembrance.

Pryor, Ted - The Rising of the Phoenix : a tribute to the life and works of William Thomas Trethewey, sculptor of Christchurch. 2002.