A brief history of the Kaiapoi railway station

The original railway station was built by Smith and Wright that year. As the town and industry expanded, the station became too small. The Kaiapoi Borough Council petitioned the Government for new buildings and it was approved. 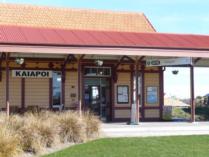 The new station was designed by George Troup who was the Senior Railways Architect from 1896 to 1925. He had arrived in New Zealand after completing an architect-surveying apprenticeship in Edinburgh. The new station was sited about 200 yards further south than the original station. George Troup's design for the Kaiapoi railway station was a wooden structure with Victorian Jacobean architectural characteristics. It was half-timbered and was roofed with Marseilles tiles. The windows were latticed and a turret sat at the northern end of the building. It was officially opened by Sir Joseph Ward on 3 February 1904.

Minimal alterations were made to the building over the years until it was damaged in a storm in 1976, when the southern half had to be removed. Passenger services from Kaiapoi ceased in 1976, although railway services tickets continued to be sold at the station until 1986, when it closed for good.

There followed many proposals about what to do with the old building, including a plan to shift it closer to Williams Street and redevelop it as a café-restaurant. It had become a target for vandals, suffering three fires, one of which was a lightning strike, and was twice saved from demolition by the actions of residents and the Historic Places Trust.

In October 2000 the Kaiapoi Railway Station Trust was formed to shift the building and restore it as a visitor information centre. The Trust bought the station from its then owner, Robert Cooke, and he promptly gave the money back as a donation. Money was raised through grants and community donations and construction of the new foundations on the Kaiapoi riverbank began in 2002. The old building was shifted to its new site on 3 April 2002. Rotting exterior boards were replaced, a new Marseilles tile roof was put on, many of the ceiling and floorboards were replaced and everything repainted. The restoration was overseen by retired builders Mel Dalzell and Murray Eder and much of the work carried out by Taskforce Green crews.

The fully restored station was officially opened on 1 June 2003 by MP Clayton Cosgrove. It was used as the Waimakariri District Information Centre until the September 2010 earthquake which shifted the building on its foundations and left it leaning towards the river. Apart from the verandah, the building was basically undamaged and has now been shifted to a temporary position in Charles Street, awaiting a decision on its ultimate future site.  The Kaiapoi i-SITE Visitor Centre has now moved back into the building.

Known as 'Major Suburban Station No. 3' it is the only railway station of its design that remains in New Zealand. It has a category II listing with the New Zealand Historic Places Trust.